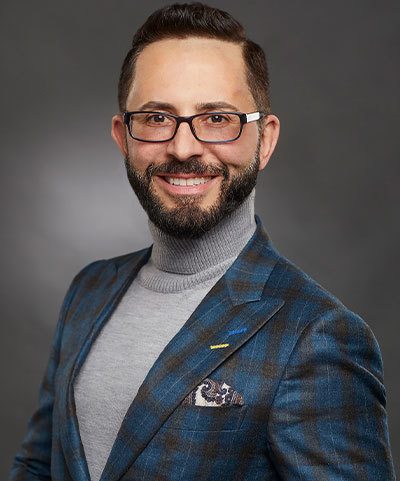 Dr. Banki is one of a handful of surgeons in the New England area who have completed a fellowship fully dedicated to the cosmetic surgery of the face, breast, and body.

Born in Tehran, his family left Iran shortly after the revolution and during the Iran-Iraq war. Witnessing the casualties of war and heroism of trauma, surgeons inspired him to pursue a career in medicine from an early age.

After completing high school in Stamford, Connecticut, Dr. Banki entered the University of Connecticut, where he pursued a liberal arts curriculum. Dr. Banki conducted basic research throughout his four years as an undergraduate under the tutelage of Dr. James Bobbitt. This culminated in his senior thesis on the synthesis of nitrosonium salts, which was highly acclaimed.

Upon receiving his Bachelor of Science in chemistry with honors, Dr. Banki was accepted to the University of Connecticut School of Dental Medicine in Farmington, Connecticut. While completing his dental studies, he completed a full year of research at the Connecticut Chemosensory Center on the study of olfactory and gustatory senses. Some of this work has been published in peer-reviewed journals.

Study of human anatomy and physiology aspired Dr. Banki to pursue a career in surgery. He was admitted to the highly competitive combined MD/residency program in oral and maxillofacial surgery at the University of Connecticut, under the chairman of Dr. Leon Assael and later Dr. David Schafer.

After graduating from the University of Connecticut School of Medicine, Dr. Banki completed a two-year residency in general surgery. He considers these some of the most formative years in his development as a surgeon. He often credits many prominent names in the surgical world who directly influenced him, such as the Chief of Surgery at the time, Joseph Civetta, MD, and the Chief of Trauma Surgery, Len Jacobs, MD. Dr. Banki especially recognizes Charles Castiglione, MD, Chief of the Division of Plastic Surgery, as well as Robert Piorkowski, MD, Chief of the Division of Surgical Oncology to have been the most instrumental in his surgical training.

In 2003, at the completion of his residency, Dr. Banki moved to Rhode Island. He was fortunate to train under Dr. Albert Carlotti, Jr. while in private practice. Here, he performed hundreds of complex orthognathic and jaw reconstructive surgeries. In 2006, Dr. Banki became a Diplomate of the American Board of Oral and Maxillofacial Surgery (ABOMS), folled by the National Board of Dental Anesthesia. In 2007, Dr. Banki was inducted as a Fellow in the American College of Surgeons (FACS).

In 2009, after much deliberation, Dr. Banki left a very successful private practice in order to pursue further training in cosmetic surgery. He returned to his alma matter, the University of Connecticut, where he completed an additional year of training in general surgery. He then moved to Oklahoma City, where he studied under Erik Nuveen, MD, DMD. During his highly sought-after fellowship, Dr. Banki completed well over 1,000 cosmetic operations, inculind 600 breast surgeries, ranging from simple augmentation to lifts and complex reductions.

Dr. Banki rejoined Dr. Frank Paletta, with whom he was previously in practice, and they have been close friends and colleagues for many years, dating back to residency. Dr. Banki’s areas of interest are orthognathic surgery, facial trauma, and cosmetic surgery of the face, breast, and abdomen.

Dr. Banki has medical and dental licenses in Rhode Island, Massachusetts, and Connecticut. He is a Fellow of the American Association of Oral and Maxillofacial Surgeons, American Academy of Cosmetic Surgeons, American Dental Society of Anesthesiology, and American College of Surgeons.

Dr. Banki enjoys lecturing locally and nationally to professional societies, as well as publishing in scientific journals. He holds faculty positions in the Department of Surgery at Warren Alpert Medical School of Brown University and in the Department of Craniofacial Sciences, Division of Oral and Maxillofacial Surgery at the University of Connecticut. Dr. Banki also volunteers his surgical time to charitable causes and is active in educating medical students and residency participants.

Dr. Banki is very passionate about issues pertaining to patient safety and quality of care. His surgicenters in Warwick, Rhode Island, and North Attleboro, Massachusetts, are certified by the Accreditation Association for Ambulatory Health Care (AAAHC). Dr. Banki serves on the patient care committee of the Miriam Hospital. He also has staff privileges at the Miriam Hospital, Rhode Island Hospital, Sturdy Memorial Hospital, and the Southern New England Surgical Center.

Dr. Banki’s business model for excellence is based on “It’s Not What You Sell, It’s What You Stand For,” a book by Roy M. Spence, Jr., which he often quotes from and encourages his staff, colleagues, and patients to read. He believes that it is only through compassionate care and uncompromising attention to details with a significant reliance on evidence-based medicine, scientific research, and education that one can be a successful practitioner of the art of surgery.

See What Our Patients Say: